GK Sprinkler company is trustworthy… The projects and installation of sprinkler systems are based on many years’ experience qualified engineers of GK Sprinkler, and cooperation with expert from the VdS Cologne or FM Global gives ensures of proper and reliable execution. 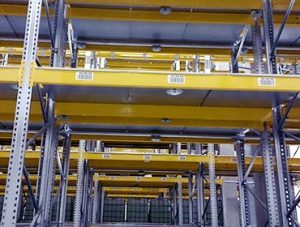 If you planning the construction of a new warehouse, manufacturing plant, or other object where should be protection of fixed firefighting device, you should think about fire protection in early design phase.

GK Sprinkler Company by using all experience and working closely with design offices, will design and execute for you a fully functional fire protection installation with limiting the cost of building installation to the minimum.

Sprinkler systems can be made in several variants, in depending of buildings conditions. GK Sprinkler Polska as a company specializing in this type of fire extinguishing systems, in agreement with the customer, will propose the appropriate  system.

Wet systems is the most common systems, using inside the building where temperature is from +5°C but not higher than + 95°C.

Wet system is the simplest one in its construction.

Pipeline network is filled with extinguishing agent. In the case of fire and opens sprinkler head, the water outflow is immediate. The advantage of this system is the immediate start of fire extinguishing.

The alarm check valve is consists of the control -alarm valve reminiscent of the build to the non-return valve, additional piping and signaling test armature. Work of the valve (raise the flap after a drop in water pressure above the valve), causes flow the water through the station equipment, generating an acoustic alert and sending emergency alert to place of uninterrupted supervision.

Typically acoustic alarm device is a water bell alarm, which is driven by flowing water through the turbine.

Dry sprinkler systems, using in the places where temperature drops below +5°C or is higher than + 95°C.

Dry system is a system where pipelines are constantly filled of compressed air or gas (under strictly defined pressure). In the case of fire and open the sprinkler head, as first form pipelines is releasing air and then extinguishing agent.

Fire extinguishing with using this system is delayed but transmission of fire alarm is immediate.

The alarm check valve is consists of a control-alarm valve reminiscent of the construction to the non-return valve, additional piping and signaling test armature.

Work of the valves (raise the flap after a drop  air pressure in the piping above the valve) causes flow water through the station equipment, what generates an acoustic alarm and sending alert message to a place of uninterrupted surveillance. Raised flap causes flow the water into the pipeline, and if the sprinkler head is open, the water will outflow.

Typically acoustic alarm device is a water bell alarm, which is driven by flowing water through the turbine drive.

Deluge systems are installations used in places, where the fire can spread really fast (paper machines) or where cooling of objects is required during a fire (tanks with flammable liquids, transformer stations).

Deluge system is a system which has two separate networks, extinguishing and detection.

Detection networks can be made in three variants:

In the case of a fire and detected it by the detection line, deluge valve is opened and flooded whole protected area.

Fire extinguishing with using this system is delayed but transmission of fire alarm is immediate.

Foam systems are fire extinguisher systems, which in addition to water, use also a foaming agent.

This method is most needed and recommended when dealing with flammable liquids, for which water alone would not achieve the extinguishing effect required. The type and amount of foaming agent depends on the material to be protected. Generally the foaming agent can be added to water in a concentration of 1% to 6%

1)      The foam is lighter and spreads evenly over the surface of the flammable material, thus separating the oxygen supply.

3)      Water present in the mixture cools the flammable liquid.

In depending on protected material and place at risk of fire, the extinguishing device is divided into three groups:

2) Light heavy devices – foamed air and water mixture volume from 20 to    200 times of the original substance. The mixture is achieved by medium nozzles and pipes.

3) Light devices – With this system the foam expansion of 1000 times the original is reached. This very dry foam contains only one liter of liquid (water and foaming agent) in 1 m3 foam volume. Here the cooling effect is less important.

Foaming is achieved by the use of a special mixer, nozzles, foam pipes and generators.

We will be happy to help you in choosing the optimal solution.