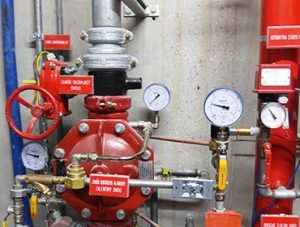 Deluge systems are installations used in places, where the fire can spread really fast (paper machines) or where cooling of objects is required during a fire (tanks with flammable liquids, transformer stations). Deluge system is a system which has two separate networks, extinguishing and detection.

In the case of a fire and detected it by the detection line, deluge valve is opened and flooded whole protected area. Fire extinguishing with using this system is delayed but transmission of fire alarm is immediate.